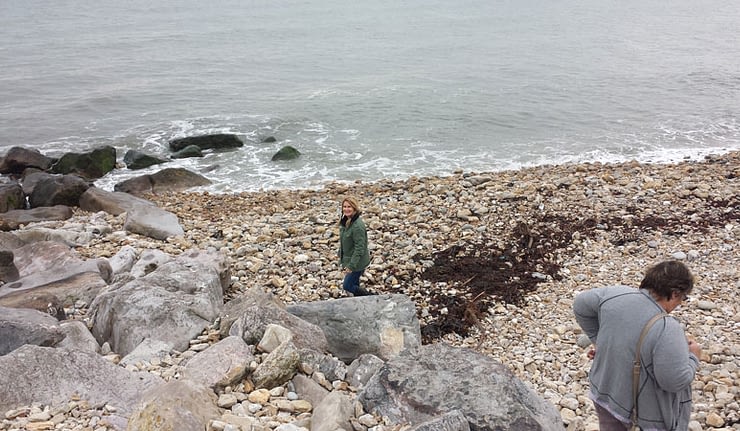 Charmouth is a village and civil parish at the mouth of the River Char in West Dorset, southern England. The population is only 1,300 or so and, as you can imagine, it is a typically ‘quaint’ British village.

I first visited Charmouth Beach in October 2015. It was not too cold (or rainy!) and there was plenty of parking very close to the beach itself. Most visitors to the beach appeared to be fossil hunters, but I was mainly interested in the sea glass!

Charmouth is best known for fossil hunting. It is sometimes referred to as “the gateway to the Jurassic Coast” which is a World Heritage site stretching along the Dorset coast.

There is a fantastic Heritage Coast Centre where you can see fossils found at Charmouth, as well as find out how to find your own. From there it’s just a short walk to the beach where your search begins. Only a couple of months after my visit there was a major storm and cliff fall which unearthed a large number of fossils. The hunters flocked to Charmouth as soon as news broke!

As you can see from the photo at the top of this page, the beach at Charmouth is fairly rocky. The rocks can be unstable and slippery, so sturdy footwear and a careful step is most definitely recommended!

I was able to find areas towards the sea itself with plenty of smaller stones and this is where I found a good haul of sea glass. There were no very rare colors, but plenty of clear, aqua, green and emerald green sea glass.

Towards the east is the mouth of the river Char as it flows into the English Channel. There was no glass to be found here, but plenty of ducks and a few swans.

I had a fun few hours of searching and came away with a small bag of English sea glass to add to my collection. It was a fun drive to and from Charmouth too, plenty of gorgeous English countryside to gaze at. I will head back one day for sure!