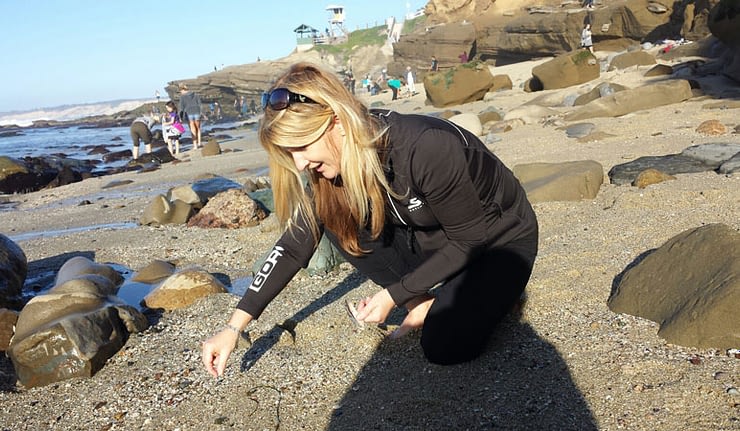 This is an amazing place for sea glass hunting! There is sea glass almost everywhere you look and more is deposited on the beach with every breaking wave.

I found found some pretty big pieces of sea glass here in a number of colors, including aqua, green, clear, brown and blue.

La Jolla is easily one of my favorite beaches in California for collecting sea glass and sea shells because there are so many to find.

The tide pools are impressive and there is often a waterfall cascading from the rocky cliffs.

La Jolla - also known as 'Jewel City' - is an affluent city within the San Diego area.

It is situated along 7 miles of beautiful Pacific coastline and, as you can imagine, it's very popular with visitors - and seals!

You will find a large number of seals basking on the rocks and enjoying the sun as much as we do!

Getting to La Jolla

Driving to La Jolla is very easy, though parking can sometimes be a challenge. If you're patient enough, a parking spot will open up though everyone else will be after the same one!

There is some paid parking which, at the time of writing, cost $2 per half hour.

There is a staircase down to Shell Beach, but then you need to clamber over a number of large boulders which can be covered in slippery sea moss.

Take your time and be safe, it's well worth it!

Here are my best finds so far from the beaches at La Jolla.

previous article
How Does Sea Glass End Up on the Beach?
next article
Does Davenport Beach Have the Best Sea Glass in the World?

Where to Find Sea Glass in California

Does Davenport Beach Have the Best Sea Glass in the World?

Where to Find Sea Glass at Laguna Beach, Orange County