Where to Find Sea Glass in Washington 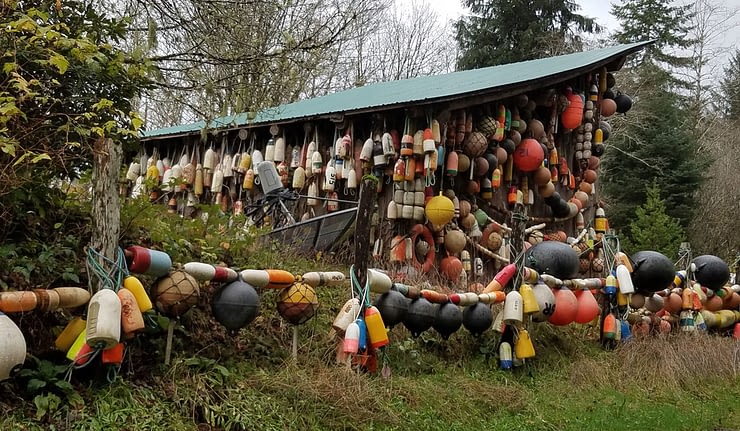 In November 2016 we spent two weeks in the Pacific North West, traveling from beach to beach and searching for sea glass. Our main reason for visiting Washington was to check out Glass Beach at Port Townsend, but we were delighted to find many more beaches worth visiting.

We were blessed with great weather too. We feared that the stereotype might be true and we'd have to endure daily rain, but we hardly saw a drop!

Here are the Washington beaches where sea glass can be found​, starting with the best one...

This is the lesser known "Glass Beach" (the other in California) but perhaps my preferred of the two. There's not as much sea glass here, but still a lot more than most beaches.

What really made it for me was the adventure of getting there! Having flown in to Seattle-Tacoma airport, we drove to Port Townsend on the Olympic Peninsula. After a good night's sleep, we started the 3 mile hike to McCurdy Point. It was vital to set out close to low tide so that we had time to get there and back, with sea glass hunting in between. Fun!

Port Townsend itself is a wonderful, historic town. Originally planned as a busy sea port, the railway only made it as far as Seattle and left Port Townsend in a bit of a mess. These days, it's a bohemian paradise full of historic buildings.

When you visit, make sure to enjoy an evening at the Rose Theatre. The Rose opened as a vaudeville house in 1907 and has experienced the transition from live theatre to silent film, to talkies, to Technicolor and now to digital projection across three unique screens. Every show is personally introduced by a host which sets the movie up perfectly.

Having taken the ferry from Port Townsend to Coupeville, we stopped off to find some coffee. We were on our way to Rosario Beach for sea glass hunting but found a hidden beach here. As well as coffee and pie, we left with a pocket full of sea glass and pottery shards too!

This little town is as picturesque as they come. In fact, it was chosen as the filming location for the movie 'Practical Magic' starring Sandra Bullock and Nicole Kidman. Hollywood rolled into town, painted all the buildings white and then back into their original colors again afterwards. Nothing like a free paint job, eh?

The real magic for me though was down some wooden stairs and onto the beach. I found some really nice pieces of pottery and well-worn sea glass, including a lavender heart. I'm not sure how far the tide comes in - or out - but there was enough beach to walk quite a way along behind the buildings up on First Street. This was a great find!

On our way to the Clinton-Mukilteo ferry, we stopped off at Bush Point. We'd heard that there was plenty of sea glass to be found and we were not disappointed. In fact, of all the beaches on Whidbey Island, Bush Point gave us the most sea glass by far.

It was a little tricky to find the beach, but eventually we got there. If you're looking for it yourself, put 'Bush Point Wharf B&B' into your satellite navigation and it will take you right to where you need to be. As we set off, we saw a sign which read "private beach and tidelands". Thankfully, it went on to say "ok to walk thru quietly" and so we did!

What better than a deserted beach, plenty of sea glass and a majestic view of the Olympic Mountains?

The sea glass was mostly thin and common colors (white, green and brown) but very nicely frosted which meant it had been in the water for some time. We did find some Coke bottle glass and a piece of cobalt blue though too.

We finished our trip by spending a couple of days in Seattle. I had a day for sea glass hunting, then my other half had his day watching the Philadelphia Eagles at Seahawks. That was fun... but first the sea glass!

We headed to Alki Beach, which overlooks the Puget Sound. It's a long stretch of beach with plenty of small stones and we all know what that means... sea glass! We found lots of it too, much of it frosted and well-worn.

Having heard many times that it does nothing but rain in Seattle, we didn't see any of it ourselves. Perhaps we were lucky, but it was fairly mild for November. Strolling along Alki Beach and picking up sea glass while ferries steamed back and forth was a really nice way to spend an afternoon.

There are lots of bars and restaurants along Alki Ave SW so when you've finished collecting sea glass, you'll be able to sit down and enjoy some fresh fish. It's a pretty great beach!