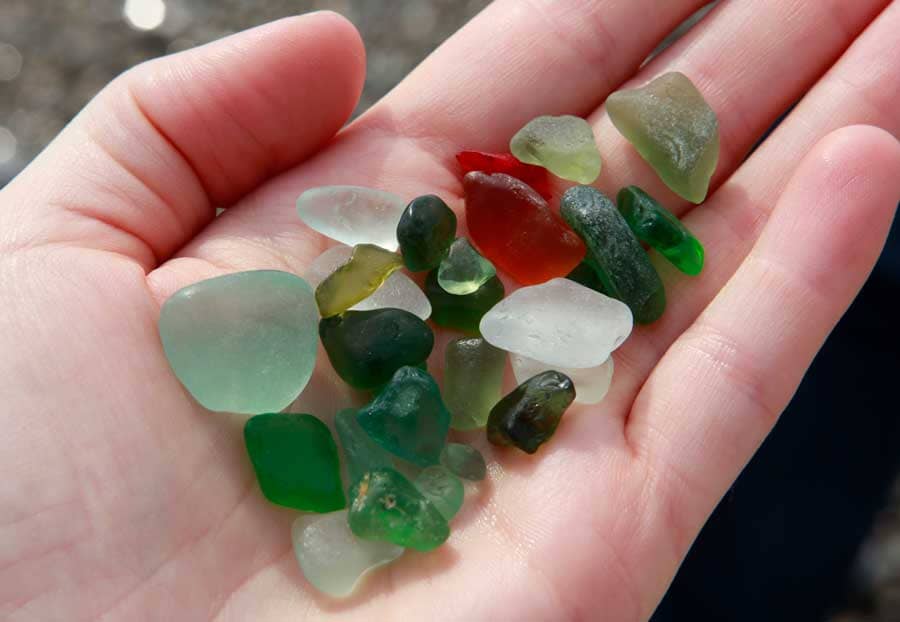 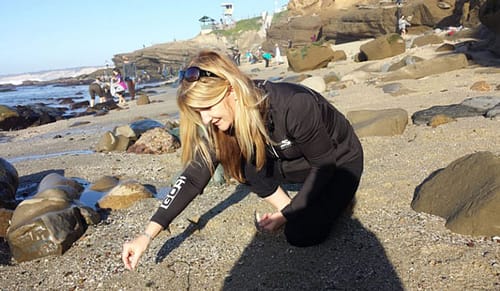 Hi, I’m Jonna Marie. I'm fortunate to be able to travel all over the world, hunting for and collecting sea glass.

I decided to start Beach Lust back in 2015 so that I could record my travels and share my favorite sea glass photos.

If you're a sea glass collector yourself, welcome! I'm going to show you exactly where the best sea glass beaches are, both here in the United States and abroad.

I've categorized my Beach Reports into US states and then other countries so it's easy to find beaches near you, or places you plan to travel to. There are also a few standalone Beach Reports for the very best sea glass spots, such as these...

If you're new to the world of sea glass and beachcombing, you will find lots of information below. Have a read, but most importantly... get to a beach and start exploring!

I was born and raised in Southern California (South Bay). I have been lucky enough to live close to the beach throughout my life and it has always been my happy place.

Ever since I spotted a piece of sea glass laying on the sand, I have been in love with it. It’s incredibly exciting to find a new piece, especially if it is an interesting shape.

My favorite color of sea glass is aqua, even though it’s not the most rare color to find.

I remember the first sea glass I ever found. It was at Morro Bay, California and a beautiful aqua color. As I walked along the beach, I saw the sun reflect on the glass and I couldn’t wait to pick up my first piece of beach treasure! That glass sits proudly on my shelf at home, along with the other sea glass I found the same weekend.

These days, I search the beach as often as possible. My sea glass collection grows every single week and I now have glass from around the world!

What is Sea Glass?

Sea glass is a broken fragment of glass which has been well tumbled by the ocean waves, giving it a frosty and lightly pitted appearance. This process can take somewhere between 10 and 100 years.

When Mother Nature is ready, these beautiful sea gems are deposited on beaches for sea glass collectors to discover. It's fascinating how sea glass ends up on the beach, a true story of 'trash to treasure'.

What is Sea Glass Made of?

Each piece of sea glass has a story. Most serious collectors love the hunt as well as learning what the piece was originally.

It was common in the past to simply dump trash into the ocean, especially along shipping lanes and shorelines. Much of that trash included glass products, such as broken tableware or auto tail lights.

There are also thousands of shipwrecks at the bottom of our oceans. It's possible for glass bottles and fine pottery items to be stirred up due to storms and wave activity, then they may eventually find their way to our beaches.

Part of a bottle bottom, tumbled into sea glass!

While most non-glass items decompose due to the salt air and sea water, glass continues to tumble back and forth with the tides. Over many years, the composition of the glass changes due to the pH level of the salt water.

For beachcombers, there is no better moment than spotting a piece sea glass glistening in the surf. If it's weather-worn and wave-tumbled, even better!

At this point, your imagination is ignited:

So many unanswered questions! It's time to look at the clues...

The color of the glass is your first clue.

The most commonly found colors depend on the area and the age of the site. You will find though, that green, brown and clear are the most common colors just about every place. These pieces were originally from bottles and household jars.

Other colors are harder to find, such as sea foam and olive green, aqua, cobalt blue and amber. These pieces were once medicine bottles, glass fishing floats, soda bottles (think Coca-Cola!) and cosmetic (Noxzema and Vicks Vaporub) jars.

Then you have amethyst, gray, black, teal, lime green, cornflower blue, pink, peach, lavender and turquoise. The origin of these colors may have been perfume bottles, old seltzer bottles, power line insulators, figurines and candy dishes.

Only one in five thousand pieces collected is red. It has often come from ship lanterns, streetlamps and car tail lights.

Even more rare though are orange and yellow, only one in ten thousand pieces collected! These would have come from tableware or, perhaps, art glass.

Shape of the Sea Glass

This is another big clue.

You will quite often recognize right away when a piece of glass has come from a bottle, perhaps you'll even be lucky enough to find an entire bottle neck! I'd love to find just the upper ring of the neck lip... one day...

Finding a bottle bottom with raised numbers or writing on it is fun! Coca-Cola bottle bottoms are a great find, they often tell you when and where it was bottled.

Bottle stoppers are also easy to identify, as are marbles which were often used as ship ballast.

You might be surprised by the amount of information you can gather just from the shape of your piece of sea glass:

Where you find the glass is also going to help identify what type of object it came from originally.

For example, a thin piece of green or brown glass on a busy public beach is likely to have come from a modern beer, wine or soda bottle. On the other hand, multi-colored and rounded chunks of sea glass at Seaham, United Kingdom will almost certainly be from the Londonderry Bottleworks.

How does Glass get into the Water?

Sea glass comes from shards of broken glass which originated as bottles, jars, glassware, table ware or even as the result of shipwrecks. The most common source of glass is from companies that sell beer, juice and soft drinks.

Not as common, is glass that comes from clear plates and glasses, windshields, windows, whiskey, medicine, spirits, ink and early bleach bottles.

In the past, when environmentalism wasn’t yet a priority, people in coastal towns would often dump their garbage (including broken glass) over the bluffs by day and burn it at night. Towns like; Fort Bragg (California), Port Townsend (Washington), Seaham (United Kingdom) and several other beaches are famed for trash that has turned into treasure.

Unfortunately, the trash dumped at Port Townsend, Washington was not all glass!

Cruise ships and other vessels sometimes dump their garbage, including assorted glassware, into the sea. Once discarded, larger glass pieces shatter, break, and are then tumbled, tossed around by the waves, weathered by salt water and friction with other materials in the sea until they obtain a glassy, etched and unique appearance.

Another source of sea glass is Mother Nature herself! The incredibly unique sea glass found off the coast of Davenport, California is the remnants of art glass from Lundberg Studios. In the 1970's, a heavy rainstorm caused the San Vicente Creek to overflow, the flooding sweeping away containers of discarded blown-glass trimmings from behind the shop into the ocean.

And let's not forget beach towns and their amusement piers, hotels, bars and other waterfront recreational areas. Imagine a bonfire on the beach, melted bottles are washed out to sea and the tumbling process begins.

How Long does Sea Glass Take to Form?

The entire process can take ten years, fifty years, or even longer! It varies depending on a number of factors, including location, wave activity, rocky or smooth bottom ocean floor and higher or lower pH levels.

Glass transforms quicker in water that has more wave activity and higher pH level. Seawater has a pH level of at least 8, which makes it alkaline and oxygen-rich.

Fresh water lakes, streams and ponds tend to have pH levels ranging from 6 to 8. An exception to this is Lake Erie, with an above average pH level of 8-9. The lake is very well known for its abundance of frosty beach glass.

When sea glass is dry, it takes on a frosted appearance even after it's been washed. This is called "hydration".

Hydration is the process in which the soda and lime content in the original glass are leached out by exposure to salt water, leaving pitting on the surface. The pits sparkle in the sun because of tiny crystals which are formed when the lime and soda combine with other elements on the surface of the glass.

Sea glass has been dragged through the constant pounding surf, sand, underwater rocks and sea shells. This results in it being broken up into small pieces and tumbled smooth by the waves, then tossed onto the shore.

A quality piece of sea glass has no shiny spots, no chips is well frosted and thick, smooth, rounded edges.

If you prefer a smooth, wet look to your sea glass, rub it with a drop of oil right after you wash and dry it. I find that baby oil works really well!

Tides, other than serving to tumble and toss these glass fragments around, eventually help to wash sea glass up on to beaches. The difference between beach glass and sea glass lies in where they are found, which in turn affects how they are formed.

While the differences are sometimes so slight that it’s hard to discern, saltwater beaches are a lot more common, and often produce the tumbling action that’s required to form sea glass. Beach glass can sometimes be found on a lake too, such as the Great Lakes in the United States.

Beach glass usually appears less weathered, and may even still have some shiny spots due to the relatively tamer tumbling action, as compared to seas and oceans. Therefore, while all sea glass is beach glass, not all beach glass is sea glass.

Why is Sea Glass Getting Harder to Find?

Sea glass is getting harder to find for a few reasons.

One of them is a positive - there is just less dumping in the oceans today. Less trash, less glass, which leads to less sea glass. Additionally, many glass items have been replaced by plastic (not so positive!). So even with the trash that is getting dumped into bodies of water, plastic just doesn’t break down the way that glass does.

On top of that, more people are now searching for sea glass along the shores and are collecting it. So chances are, before you get the opportunity to stumble upon a piece, an eagle-eyed collector may already have swooped down on it!

Sea glass has been used in art for many years, and for a good reason! It is beautiful, and inspires wonder in those who love tracing their history, and imagining the path it took for these shards of household glass to wash up on a beach as a bright piece of sea glass.

I love making jewelry with sea glass I find on the beach!

Once you know about the journey your sea glass has been on, you’ll be able to appreciate it all the more when you are lucky enough to spot one on a beach!

Click here to read more about my sea glass adventures!
BeachLust.com is a participant in the Amazon Services LLC Associates Program, an affiliate advertising program designed to
provide a means for sites to earn advertising fees by advertising and linking to Amazon.com.