As you walk along the beach, you spot it - a green, brown, or even blue or red piece of sea glass. As beautiful as a gemstone in some cases, they have been made into jewelry and decorative pieces of art.

Have you ever wondered how that amazing piece of sea glass came to be on the beach?

Sea glass has humble, everyday origins - starting out as shards of broken glass from bottles, jars, glassware, tableware or even shipwrecks. Back when it was even more common to dump garbage in the water, glass from trash was dumped into the sea, especially along shipping lanes and shorelines.

Sharp shards of sea glass are worn down, being chemically and physically weathered over time, to form the rounded, frosted appearance of sea glass.

The Process of Sea Glass

When glass is tossed into the sea, it is broken into smaller shards. These pieces are then tumbled, tossed, pushed and pulled by tides and waves, and rolled against rocky surfaces or dragged along the shore.

This smooths the glass shard down over time and shapes it into round or triangular pieces which lose their glossy appearance, and become frosted with unique etchings. The frosting happens when salt water leaches into the glass, chemically altering it.

This happens over a period of anywhere between five and fifty years.

If you find a piece of glass that's too shiny or jagged, throw it back in for a future sea glass collector to discover!​ How Sea Glass Ends Up on the Beach

There are areas in the ocean where dumping is very prevalent, and one is known as the Great Pacific Garbage Patch.

Warm air and currents pushes garbage to this particular patch of the ocean, and tides wash the debris up onto the shores, bringing along with it glass, and ultimately sea glass.

Glass also washes up on the beach more commonly along popular marine trading routes and ports. This is where garbage used to be treated onboard, then tossed into the ocean.

Sea glass is more likely to be found along these shorelines and routes, as the waves toss the glass up against the shore.

Sea Glass can be distinguished by its color, with some more common than others.

The most common colors are Kelly green, brown and white. More uncommon are those in soft blue or green, forest or lime green, gold, amber and jade.

There are also different types of sea glass, distinguishable by their origins: 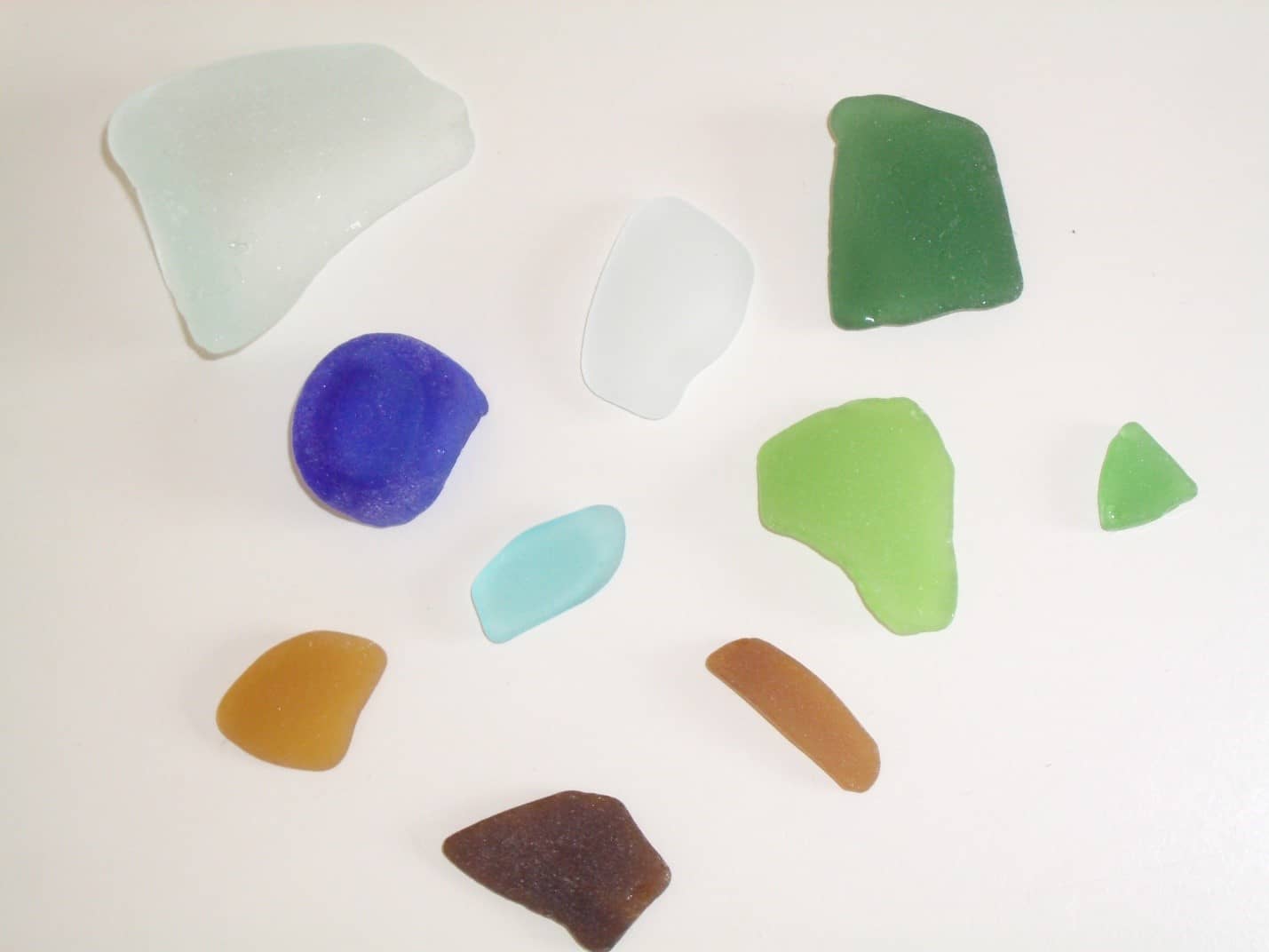 By No machine-readable author provided. Epstein.Mark assumed (based on copyright claims). [Public domain], via Wikimedia Commons

Keeping the origins of Sea Glass in mind, will be helpful in looking for an area where there has been a historic settlement at some point. There will be a higher chance of finding pieces of sea glass that washed up there when coastal dumping was still a common practice. If these beaches are also along historic marine traffic, or along major marine stops, you’ll also be more likely to find pieces.

Check when low tide is before you head down, refer to a tide chart for more specific measurements. I have found the best amount of sea glass an hour before or an hour after low tide.

Also remember to check the weather report, dress accordingly and wear appropriate shoes that are comfortable on sand and slippery rocks.

As areas with stronger and more forceful tides moves shards of glass better and smooth down their edges, you may have a better chance on beaches that are located north on the planet - that’s where the tides are more dramatic. These beaches will have good tide fluctuations.

Whenever possible, plan a sea glass hunt after a storm or high winds. The combination of high winds and rough seas toss up pieces that are buried offshore beneath the surface. Beaches that have rocky or pebbly patches are more able to easily catch sea glass, improving your chances of finding them among the rocks.

Beaches that also aren’t that touristy or crowded all the time with fellow collectors, will offer a higher chance of you finding sea glass. Bring a container to carry your sea glass in, and it would be nice to bring along a bag to pick up any garbage that you see along the way too!

Click here to check out our top tip for finding more sea glass!

Searching for sea glass is a process, so do take care, and make a point to be aware of local beach guidelines and laws. Many communities also have private property laws, so be wary of accidentally intruding on someone else’s property.

Look up shoreline restoration projects, wildlife habitats, property lines and tide lines to be sure of where you are heading. With that in mind, happy sea glass hunting!

Discovering a piece of sea glass can be an enjoyable and even meditative experience! As you find and collect them, remember to be mindful of the beach you are on, and to show it and the people around you their due respect.