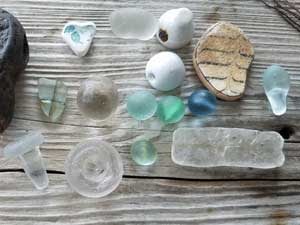 England has some of the best sea glass beaches in the world. Plenty of pebble patches, hiding perfectly smooth beach treasure. It's magical!

Every time I pick up a piece of English sea glass, my imagination runs wild. Did it come from a medicine bottle, tossed into the sea by a King or Queen?!

Ok... so it's more likely to come from a 20th century soda bottle, but I don't always know for sure. That's one of the mysteries of sea glass and why we love it, right?

Being an island, there are plenty of English beaches to check out. The weather is friendly to sea glass hunters as well; frequent storms to stir up the waves and rain to keep other beachgoers away.

I'm going to let you know exactly which beaches to visit so you can fill your pockets with mermaid tears. I'll be amazed if you don't end up loving English sea glass as much as me.

There's no other beach on the planet quite like Seaham. You won't find as much sea glass as you would at Glass Beach in California, but the quality is comparable to the art glass at Davenport, California.

More than a century ago, there was a large bottleworks at Seaham. At the end of each day, the workers would dump any spoiled glass into the North Sea where it has been tumbled to perfection before washing up on the beach.

Much of the glass was meant to be colored but, for whatever reason, the process was not completed properly. This resulted in multi-colored sea glass - also known as "multis" - for us to marvel over today.

Seaham deserves an entire page of its own, so that's what I've done. I've added plenty of photos and a couple of videos too, so you can experience this sea glass paradise for yourself. Enjoy!

Click here to read all about Seaham sea glass

Ryhope Beach - also known as Ryhope Dene Beach - is just north of Seaham Hall Beach in County Durham. It is mostly shingle with sand near the waters edge and large tide pools.

Within minutes of arrival, I started to find large pieces of sea glass among the rocks. There was not multi-colored sea glass - also known as "multis" - on this particular day as I found at Seaham, but plenty of aged pieces.

My best find was the large bottle stopper top shown below.

If you have some extra time while visiting the area, then Ryhope is an interesting beach to spend an hour or so. Really though, Seaham is where you should spend the vast majority of your time.

There are two ways to get to Ryhope Beach.

The first is to park in the large, free car park at Seaham near Tonia's Café and walk. Head down to the beach, turn left (north) and, around 0.4 miles later, you will arrive at Ryhope. You'll know you're there when you pass the large rock below.

Try to set out a good two hours before low tide so that you will have time to hunt along the way!

The second way to get there is to drive to Ryhope itself.

Park near Robson Place and walk through the tunnel which goes under the A1018 and railway line. The walking path takes you right down to Ryhope Beach and, if you're lucky, you'll be able to take one of the parking spots right near the tunnel entrance.

Minster-on-Sea is around 50 miles east of London. It is situated on the Isle of Sheppey, an island in the Thames Estuary. It was snowing lightly when I visited, but that just meant no-one else was out on Minster Beach taking my sea glass!

We found a free carpark near the Little Oyster Tea Room and there was also free street parking, but we were able to park up very close to the seafront. That was good news as it was very, very cold!

We followed the pathway down to the promenade and onto the beach itself. There were no other sea glass collectors braving the elements, but plenty of dog-walkers.

It's a lovely clean beach, mostly covered in shingle but with sand toward the waters edge. Right away, I found several pieces of pottery along with large, smooth flat sea glass. It was mostly pale blues, aquas and light green - ideal for a stack!

Most of the sea glass I found at Minster-on-Sea was perfectly smooth and there was lots of it.

I also stumbled across this fantastic marble and let out a squeal of delight!

The majority of my beach treasure was found in the rocks and close to the promenade. I walked in the direction of the cliffs and it looked as though there had been a landslip at some point, but I found less sea glass the closer I got to the cliffs.

With tummies rumbling and pockets full of sea glass, we headed back towards the carpark. We drove up the street to The Playa pub for a full English breakfast and hot coffee.

I will definitely be going back to Minster-on-Sea at some point, just for the beautiful colors and the smoothness of the sea glass.

The Isle of Sheppey is well known for fossils and other treasures, but the weather was chilling us to the core so we saved fossil hunting for our next visit.

Charmouth is a village situated at the mouth of the River Char in West Dorset. The population is only 1,300 or so and, as you can imagine, it is a typically 'quaint' English village.

I first visited Charmouth Beach in October 2015. It was not too cold (or rainy!) and there was plenty of parking very close to the beach itself. As you can see below, the beach at Charmouth is fairly rocky.

The rocks can be unstable and slippery, so sturdy footwear and a careful step is most definitely recommended!

Charmouth is best known for fossil hunting. It is sometimes referred to as the "Gateway to the Jurassic Coast" which is a World Heritage site stretching along the Dorset coast.

Only a couple of months after my visit there was a major storm and cliff fall which unearthed a large number of fossils. Many fossil hunters flocked to Charmouth as soon as news broke!

There were quite a few fossil hunters on the beach when I visited, but nobody else looking for sea glass. Win!

I was able to find areas towards the sea itself with plenty of smaller stones and this is where I found a good haul of sea glass. There were no very rare colors, but plenty of clear, aqua, green and emerald green.

Towards the east is the mouth of the river Char as it flows into the English Channel. There was no glass to be found here, but plenty of ducks and a few swans.

I had a fun few hours of searching and came away with a small bag of English sea glass to add to my collection. It was a fun drive to and from Charmouth too, plenty of gorgeous English countryside to gaze at. I will head back one day, for sure!

Lulworth Cove in Dorset, England is a natural wonder. It is situated near the village of West Lulworth and forms part of the "Jurassic Coast World Heritage Site". Around half a million people visit each year, though mainly in the summer so it was fairly quiet when I visited in October 2015.

If you have seen the movie World War Z starring Brad Pitt, you may well recognize Lulworth Cove from the closing scene.

There was not a large amount of sea glass to be found here, but I did collect a few nice green and clear pieces. The beach is mostly covered in small stones so I was hopeful of some good finds, but perhaps being inside the cove itself meant that not so much was washed up.

Despite my meagre haul of sea glass, I was not at all disappointed by my day out. The scenery is incredible and well worth exploring. There are some fairly steep paths to climb if you want the best views, so wear sensible walking shoes or boots.

If you’re planning to visit Lulworth Cove, make sure you stop off at Corfe Castle. As well as the amazing castle ruins – more than 1,000 years old – you can also enjoy a spectacular cream tea at the National Trust tea room. Not to be missed!

Southbourne is a suburb of Bournemouth, Dorset. It sits to the east between Bournemouth and Christchurch, boasting a wonderful stretch of ‘Blue Flag‘ beach.

The beach at Southbourne is very easy to reach by public transport. During the winter there is plenty of parking, but the first glimpse of sun sees crowds of visitors flock to the sand. There is little point trying to search for sea glass when that happens!

Beautiful as it is, Southbourne is definitely not the best beach for finding sea glass.

However, when you do come across a piece it brings a huge smile to your face! There’s something hugely satisfying about finding glass after a long search, never giving up, keeping the faith and all that good stuff.

Finding a heart-shaped rock too? Well, that's just a bonus!

Two hours of searching for two pieces of sea glass. Red is fairly rare though, so it was well worth the time spent looking.

In the video below, you will see wooden structures stretching out into the sea. These are called "groynes" and they help to prevent coastal erosion along Bournemouth’s seafront.

Erosion is a huge problem in this area and the coastline is currently being lost at around one metre per year.

Seawalls and groynes have been built for more than 100 years to protect the cliff and beach replenishment has been used as a form of coast protection for 45 years. This is when huge construction vehicles dump more sand onto the beach during the winter, only for much of it to be washed away during the summer months.

With such powerful currents, it's amazing to me that there is not more sea glass being washed up onto the beach. Perhaps it is found futher down the coast. I'll investigate and report back!

Have you been sea glass hunting in England?