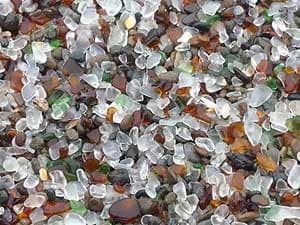 Glass Beach at Fort Bragg, California is world famous! It gets its name from the smooth, colorful glass pebbles that wash up onto the shore.

This amazing man-made wonder - with a little help from Mother Nature - is believed to have the highest concentration of sea glass in the world.

I first visited Glass Beach in March 2016. The weather forecast was for heavy rain and, unfortunately, the meteorologists got it right.

Of course, I'm a sea glass fanatic so I didn't mind getting soaked through as long as I could get my hands on plenty of beach treasure. The stormy weather threw plenty of glass onto the beach and kept the crowds away, so it was a win-win for me!

Here's my complete guide to Glass Beach, full of tips and advice which will prepare you for your visit.

Fort Bragg is a city on the coast of Mendocino County, California. It's just north of San Francisco along the Pacific Coast Highway, which runs from San Diego all the way up the coast of California.

In 1906, there was a huge 7.8 earthquake in San Francisco known as The Great San Francisco Earthquake. Most of the Bay Area was devastated, including the center of town in Fort Bragg.

The earthquake resulted in a fire that threatened the local saw mill and the city. All brick buildings were damaged and only two were not destroyed completely. Several of the frame houses were knocked off their piers. The fire downtown burned the entire block bordered by Franklin, Redwood and McPherson Streets.

Many homes and businesses were damaged beyond repair and had to be bulldozed. The rubble was quite literally dumped into the ocean at the end of Pine Street. 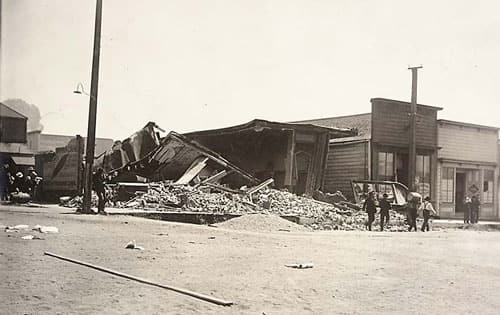 Within 12 months following the earthquake, most of the downtown reconstruction was completed.

The earthquake actually brought prosperity to Fort Bragg as the mills the provided lumber to rebuild San Francisco, and the lumber ships returning from San Francisco were ballasted with bricks that they used for rebuilding Fort Bragg.

By 1916 Fort Bragg had become a popular place to visit and to live in. With more people living in Fort Bragg came more trash.

How was Glass Beach formed?

In the early 20th century Fort Bragg residents, like most other coastal towns, threw their household garbage over cliffs and into the ocean. They casually discarded glass, appliances, and even whole cars without a second thought for the environment.

What no one realized was that they were creating the most incredible Glass Beach for future generations to enjoy!

For more than 30 years, the pounding waves washed the trash up and down until the discarded glass became small, smooth, colored pieces of sea glass that cover the beaches today.

Apparently, the ocean was not carrying anything out to sea. The rock formations set a up wave patterns that kept everything on the beach, even in the worst of storms. As the beach began to fill up with debris, the towns people began to burn and finally had to keep moving the dump sites.

The majority of glass pieces are clear, brown and green. Occasionally, you'll find pieces of sea pottery and rarer colors of glass, even "fire glass" from that burning debris.

At that time, the land was owned by the Union Lumber Company and locals called it "The Dumps". There were three sites that were used to dump everything from building rubble, bricks, lumber and cars to broken china, milk glass, table ware, food containers and empty medicine bottles.

In the late 1990's, Glass Beach underwent a thorough clean-up.

Thankfully for sea glass hunters, the glass from bottles, tail lights, windows and other items continued to tumble in the surf.

The first, or original, site was used from 1906 until 1943. Nowadays, this site is a little more difficult to get to and is not part of the MacKerricher State Park. I have been told by the locals that the easiest way to visit this beach is by kayak, but you can also get there on foot during very low tide.

The middle site was active from 1943 to 1949. I visited this site and it was incredible! The beach was loaded with an amazing amount of smooth, surf-tumbled sea glass gems. This site is the easiest to get to and has a long stair case down to the beach.

The third site is part of the MacKerricher State Park. It was an active dump site from 1949-1967. This site is accessible on foot, but there is some degree of difficulty. There doesn't seem to be much sea glass, reportedly due to people removing it by the bucket load for several years. It's still a beautiful beach though, with several coves and tide pools.

Can you collect the sea glass?

Plenty of visitors do pick up souvenirs of their visit to Glass Beach, as did I. At the time, no laws had been passed.

The intention is to preserve Glass Beach for future generations to enjoy but, of course, the sea glass will continue to be pounded by the surf and will eventually erode back into sand.

The city of Fort Bragg hopes that many more visitors will be able to enjoy the spectacular sights before that happens and I definitely recommend a visit. You'll love it!

Take Hwy 1 to Fort Bragg and look out for the Denny's Restaurant on the corner, as that is where you turn onto Elm Street. Continue towards the the ocean and park in the lot (which was free when I visited).

There is a wide path leading to the beach from the parking lot. Walk towards the ocean, turn south/left at the bluff's edge and you'll find a path down to the coves. There is a staircase down to the beach, which is Site Two or the 'Middle Site'. This cove is outside of the MacKerrney State Park boundary.

The closest airports are:

The Mendocino Coast is about four hours drive north of San Francisco/Oakland or six hours if you take the Coast Highway. Fort Bragg is a shorter drive from Sacramento, but still three-and-a-half hours via I-5 N, CA-20 and US-101.

This is a small museum and gift shop, open daily from 10am to 5pm. The museum is free, but they do ask for a donation.

It gives a great overview of the history of Glass Beach as well as displaying a big selection of sea glass. You can look at all the different colors of glass that have been washed up onto the beach and find out how they got there over the years.

I was in and out of the Sea Glass Museum in about 45 minutes.

Capt. Cass Forrington, the owner, is a retired merchant marine captain and has great knowledge and terrific stories. His museum has a lot of sea glass and other treasures he has found over the years. He also makes and sells his own sea glass earrings, necklaces and other jewelry.

I learned quite a bit about ecology and geology, I would have to say it was time well spent.

How to get there: The museum is one mile south of the junction of Highways 1 and 20. This is just past the Botanical Gardens and roundabout, on the east side the highway.

From Glass Beach, go 3.2 miles south on Highway 1 and you will see the Sea Glass Museum on your left.

The Mendocino Coast tends to be on the cool side. The average daytime temperature is around 50 to 60 degrees pretty much year round, with an occasional storm in the winter. The July high is around 64 degrees and in January the low is about 39.

On average, there are approximately 200 sunny days per year in Fort Bragg, California.

The key is to dress in layers because the weather can change hourly.

Plenty of wave action to tumble the glass

Sea glass washes up with every wave!

Most of the sea glass is clear, green and brown

Other colors are more rare, but you can find them if you're persistent

I was already soaked from the rain, so...

There's plenty of information about the history of Glass Beach

While you're in the area, why not drive through a tree?!

Have you been to Glass Beach?

Or are you still planning your visit?

Let me know in the comments below!