I absolutely love the town of Cape May, it's a designated Historic District and a National Historic Landmark due to its concentration of Victorian buildings. Cape May is also one of the country's oldest vacation resort destinations.

Sunset Beach is located at the southern tip of Cape May Peninsula where the Delaware Bay meets the Atlantic Ocean. There's a reason they call this sunset beach, you guessed it, the sunsets are amazing! More about that later... But first, let's talk about our (very chilly) day at the beach. 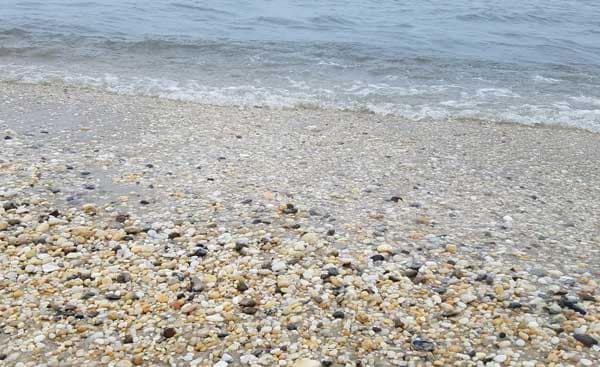 Tons of smooth pebbles and cape diamonds serve as the beach's "sand".

I explored the beach with my friend Maureen from Hold The Gluten. We had both been home bound for a couple weeks due to a recent storm that brought record low temps along with several feet of snow and ice to our New Jersey beach towns. Cabin fever was setting in, so despite the freezing temps and high winds, the beach was calling and off we went!

In order to get from Sunset Beach's parking lot to the shoreline, we literally had to climb over a large iceberg (or frozen wave?) that ran the whole stretch of the beach. As a former California gal, it was like nothing I've ever seen before.

It was low tide and we needed to be on the waterside of the "wall of ice" so up and over we went. We walked in the direction towards the tip, where the Delaware Bay meets the Atlantic Ocean. Wondering how tides work? Read here for more details.

The beach is mostly smooth, tiny pebbles and lots of Cape May Diamonds, but not much sand.

What is a Cape May Diamond? 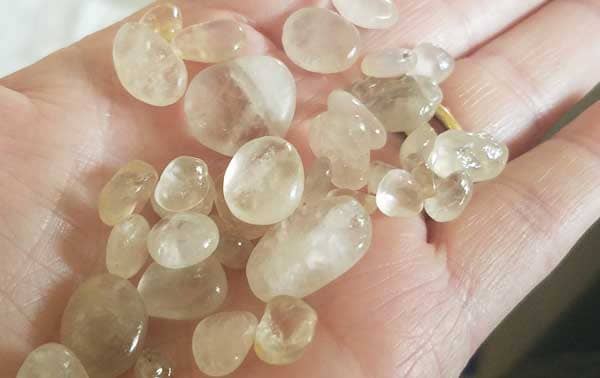 A handful of Cape May DIamonds.

Cape May Diamonds are crystal clear quartz stones that have been polished by the same tumbling sand and ocean wave action like sea glass.

In fact, I have found a few perfectly clear round baubles that were difficult to tell if they were clear sea glass or a Cape May Diamond particularly when wet! It was only when the Cape May Diamonds dried or were held up to the sunlight that I could see the occlusions that are not usually present in a piece of sea glass.

See below for my heart shaped Cape May Diamond that I found on the beach. I just love it! I think I'll make a ring for it.

Is There Sea Glass at Sunset Beach?

It may not be the ultimate beach for sea glass, but it's definitely worth spending some time there!

Maureen and I each found a few pieces of smooth, wave tumbled sea glass. I'll bet there was more under the huge frozen waves and icebergs that covered most of the beach. The lady running the Cape May Gifts Store told us that much of what sits on the floor of the bay gets pushed up onto the shore by the icebergs.

How awesome is that? I would have explored the beach much longer, but I was really cold (again former California gal). I'm planning on going back in the warmer weather to see if I'm able to find more sea glass when the beach is exposed. The icebergs were cool to see, but totally covered up our hunting area!

Since the beach is located at the very southern most tip of New Jersey is the reason its one of the few places to see the sun actually set in the west over the water.

There is a daily Sunset Gathering. There is a daily flag ceremony in season, a flag from the casket of a veteran is flown on the beach. At sunset the flag is lowered in a beautiful ceremony. I would recommend getting there really early, it can get pretty crowded as people begin to gather before sundown.

Check out the awesome fossilized shark's tooth in the photo below that Maureen found on the beach. At least that's what we were told by several locals in the gift store. We're thinking it was dredged up by the storm and ice.

Can you believe there is also a sunken ship here? Known as the "concrete ship", the SS Atlantus  sunk in 1926 during a storm and is disappearing fast.

Don't forget to explore the WW II tower you'll pass just before entering Sunset Beach. Built in 1942, the tower was one of 15 towers that helped aim batteries of coastal artillery.

There are so many reasons to visit the historic seaside town of Cape May, New Jersey. There's seriously something for everyone! From sea glass and "diamonds" to history and shopping, you can easily spend a full day (or weekend) in this quaint town.

There are two lovely family owned gift shops loaded with (I've never said this before) reasonably priced, super cute beachy items. The stores are open year round. The clothing store has a wide selection of beach apparel and the general store has a little bit of everything, including Cape May diamonds for purchase.

Within the town of Cape May, you'll find several blocks of outdoor shopping that include boutique shops with apparel and accessories, fine and casual dining, and gifts and souvenirs.

Have you visited Sunset Beach? What treasures have you found? Share with us in the comments below!